Blog - Latest News
You are here: Home1 / Blog2 / The most iconic image of the 20th century? 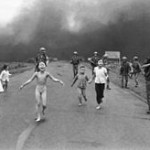 In the week that Vietnam ratified the Hague Convention on Intercountry adoption, paving the way for Irish couples to adopt from that country once more, images of Kim Phuc immediately raced through my mind.  As a nine-year-old Vietnamese girl, her photograph was beamed around the world and to this day, remains one of the most memorable  and iconic images of the 20th century.

Taken by Pulitzer Award-winning, Associated Press (AP) photographer, Nic Ut, the image was so powerful, so vivid and so haunting, some would argue it influenced the course of the war in Vietnam.

Pictured centre-left, Kim Phuc is caught on camera, fleeing for her life after the airstrike.  She is naked.  Her clothes have literally been blown off her back and the gel-like gasoline is painfully burning its way through every layer of her skin. As she runs, she is heard screaming “Nóng quá, nóng quá” (too hot, too hot).  She doesn’t yet realise it, but she has suffered severe third degree burns to her body.  She is surrounded by a number of other Vietnamese children – equally terrified, equally terrorised – their only instinct now is to live.

Also present in Trang Bang on that fateful day was Christopher Wain, a young war correspondent for ITN.  Situated just 400M from the Napalm blast, he observed the small group of children fleeing the scene.  He hurried to Kim, giving her some water to drink and pouring the cooling fluid on her severe burns.  Her legs gave way and she passed out.  Witnessing this, photographer Nick Ut, took Kim in his arms and rushed her to the nearest hospital, the British-run First Children’s Hospital in Saigon.  She wasn’t expected to live.

In the meantime, AP released the pictures.  They were picked up worldwide and thanks to the medium of television, were beamed into every American home, coast to coast.  The public was horrified, outraged, incensed.  The politicians were worried.  President Nixon cast doubt at first, on the authenticity of the image.  After all, he was already fighting a war on two fronts.  And now, his efforts to quell public opposition at home to the war had suffered a severe setback.  The American public had never before seen an image, which so vividly portrayed the horrors of modern warfare, the pain and suffering experienced by innocent civilians, the loss of a child’s innocence.  Like the Napalm itself, the image burned its way into the public psyche and some would argue, contributed to the political decision to withdraw American military support for the war, the following year.

Questions began to emerge about the welfare of the young girl.  ITN correspondent, Christopher Wain finally tracked her down to the British hospital.  When he asked a nurse about Kim’s condition, he was told that she would die in a couple of days.  Unwilling to accept this diagnosis and desperate to ensure her survival, he frantically negotiated with Vietnamese, American and British authorities to have her moved to the American-run Barsky hospital.  After all, Kim’s welfare had become a politically-sensitive issue thanks to the worldwide attention her picture had received.  Wain succeeded and saved her life.  14 months and 17 surgeries later, Kim returned home to the rubble where her village house once stood and the broken hearts of family members, who had lost many loved ones during the conflict.

Some would argue that over time we have become de-sensitised to the horrors of war.  Recent images of Libya’s Muammar Gadaffi, shortly before his death, were brutal, graphic and disturbing and while they did provoke worldwide reaction, they had nowhere near the impact that Nick Ut’s image had back in 1972.

Nic Ut is still a photographer with AP and an American citizen.  His most recent success is based on far more mundane news – pictures of Paris Hilton in tears in the back of a Sherriff’s vehicle in 2007 which were picked up worldwide.

Kim Phuc never escaped her notoriety as the “Girl in the Picture”.  She was used by the communist Vietnamese government as a propaganda tool after the war.  However, she managed to get permission to study medicine in Cuba, where she met her future husband.  On honeymoon and during a refuelling stop in Newfoundland, the couple disembarked the plane and formally requested political asylum in Canada.  She was made a Canadian citizen in 1996.

In 1997, Kim established the first Kim Phuc Foundation, in the US, with the aim of providing medical and psychological assistance to child victims of war.  She continues to speak of her experiences as a child and campaigns for the rights of children in war-torn areas of the world.

Four Seasons by Candlelight at the NCH – a real treat for the senses with... Freed from the shackles of party politics, what would an alternative cabinet...
Scroll to top
This website uses cookies to improve your experience. We'll assume you're ok with this, but you can opt-out if you wish.Accept Read More
Privacy & Cookies Policy