Blog - Latest News
You are here: Home1 / Blog2 / Four Seasons by Candlelight at the NCH – a real treat for the senses... 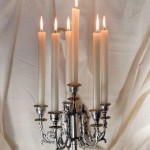 Performed by the Mozart Festival Orchestra and directed by David Juritz

It was the meeting of old and new.  Against the modern backdrop of the National Concert Hall, the Mozart Festival Orchestra performed a selection of the finest Baroque music, in authentic 18th century period costume.  The audience of young and old delighted in the evocative candle-lit style setting, which transported them back in time to enjoy classics from Bach, Handel, Mozart, Purcell, Charpentier and Vivaldi.

World-renowned trumpet soloist, Crispian Steele-Perkins delivered a delightful performance of Handel’s “Trumpet Suite in D Major”.  In a distinct change of mood, young soprano, Ruby Hughes performed a truly bewitching interpretation of Purcell’s “Dido’s Lament” from “Dido and Aeneas”, an operatic work based on a slow descending baseline, which created a wonderful, haunting ambience.  A varied program of Baroque classics followed including well-known pieces such as Mozart’s “Eine Klein Nachtmusik” and Bach’s “Air on the G String”.

Each piece was interspersed with historical and sometimes humorous narrative by director and lead violinist, David Juritz, making every work accessible for non-fans of the classical genre.   But the evening was crowned by his outstanding interpretation of Vivaldi’s violin concerto and masterpiece, “The Four Seasons.” A native South African, Juritz completely transformed the atmosphere with his energy, skill, exuberance and passion.  Here was a true artist in action, painting vibrant, pulsating pictures in sound on his instrument dating from 1748.  The evening drew to a close with thunderous applause from the audience.

The Four Seasons by Candlelight is a real treat for the senses with true cross-genre appeal.

I was shocked. This was the first time in ages that I experienced quality customer... The most iconic image of the 20th century?
Scroll to top
This website uses cookies to improve your experience. We'll assume you're ok with this, but you can opt-out if you wish.Accept Read More
Privacy & Cookies Policy