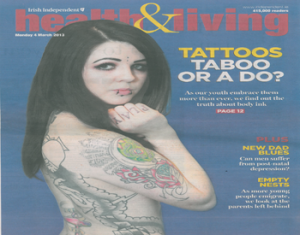 Some spend years working towards a full body-suit; a multi-coloured, intricate canvas of narrative art with skulls, serpents, script and a host of religious imagery.  Others opt for a discreetly-placed, subtle symbol of love or loss – a constant, visual reminder of a time of emotional upheaval in their lives.

The modern tattoo industry has become commercialised through celebrity, according to Adrienne ní Mhuirí, training officer with the Association of Body Modification Artists in Ireland (ABMAI), a voluntary organisation dedicated to the improvement of professional and ethical standards.

“It’s become much more acceptable to have a visible tattoo you can’t hide,” she explains.  “Three or four years ago if someone came in looking to have a neck tattoo, you’d spend a lot of time explaining to them about their job prospects, their social prospects.  That’s not such a big deal anymore. Now you can go into a formal office environment and see people with tattoos.”

In ABMAI’s experience, the profile of those taking a trip to their local tattoo studio is equally split between the under 30s and those in the 30 to mid-50s age bracket.

“Tattooing has increased for all age groups but younger people are getting tattooed more than they were and they’re getting bigger tattoos, which is quite surprising,” says Adrienne.  “We once had a 72-year-old woman come into our studio.  Her husband didn’t like tattoos so after he died, she got one of a parrot on her shoulder and returned for a love bird the following year.”

Brian Duffy (32), from Blanchardstown, Dublin is a professional tattoo artist at Wildcat Ink in Dublin’s city centre. He can’t count his tattoos anymore as they simply blend into each other but his legs, arms, back, neck, chest and ribs are inked to varying degrees.  He had his first tattoo at 18.

“It was a simple black tribal tattoo, which we would consider a ‘bread and butter’ tattoo.  The whole idea was to have my first one as big as possible.  I wasn’t really concerned about the style.  I got that done on my upper left arm.”

Like many who enjoy body modification, Brian’s passion for ink stems from an early interest in art and the influence of a family with a strong military background.

“My father, grandfather and uncles all had tattoos and I was always fascinated with them.  From a very early age I loved art.  I was always the kid that wanted to stay in with his colouring books and pencils as opposed to going out on the street to play football,” he recalls.

Brian added slowly to his tattoo collection at first, primarily due to poor finances.  He studied graphic design in college and despite the offer of lucrative job opportunities on graduation, decided to travel instead, spending a year in Umeå, a remote village in the north of Sweden.

He returned to Dublin to seek an apprenticeship and armed with his portfolio of work, visited every studio in the city.  Wildcat Ink, a well-established business in St Stephen’s Green saw the creative potential and took him on.

“I’m at the stage now where most of my tattoos have little or no meaning. Now my view is – and as cliché as it might sound – it’s just skin.

“In my mind, it’s like a gallery.  I’ll walk past 10 paintings and I won’t really enjoy them but one painting will speak to me and I can look at that for hours. It’s the same with tattoos.  I’ll see a piece of art and I’ll think, that’s really beautiful, I want that on my body. I want to be able to look at it.”

Many of Brian’s tattoos reflect a religious theme – an image of the sacred heart and praying hands adorn his upper left arm.
“I wouldn’t say that the imagery has to do with my beliefs but more so my love of art.  When I was younger, my inspiration was Caravaggio and the Old Italian masters.  People think I’m super religious but I just think it’s beautiful artwork.”

Reflecting the reality that tattoos are now much more socially acceptable than they used to be, Brian rarely gets a negative reaction and people don’t stare as much as they used to.

“A lot of girls like them,” he says.  “My girlfriend is tattooed – she likes guys with tattoos.  She’s going to be a secondary school teacher and she’s getting a full sleeve done.  But she knows quite well that when she starts teaching, she has to keep that covered.  My tattoos are for me – they’re not really for other people’s enjoyment.”

Kay Fagan (28) from Castlepollard, Co Westmeath is a part-time model and body modification specialist.  She had her first tattoo at the tender age of 15, with the full support of her mum.

“It’s a compass in the middle of my back but I’ve since had it covered with another one.  I think at the time, it was symbol of giving me some direction in my life but I don’t think that far into my tattoos now.  It was far too young to get a tattoo and I would never, ever recommend it to anyone.”

Kay’s tattoos are divided into distinctive sections.  Her whole left side is her “realistic” side where a portrait of actor, Vincent Price takes pride of place on her forearm.

“It’s my favourite tattoo.  I loved all of his movies when I was a kid and his voice; there’s something hypnotic about his voice.  I get to see it every day and I look down on it and I love it. I get the nicest response from everybody with that.”

Kay also has an extensive piece of art, which runs from her armpit to the base of her spine.  Based on an oil painting by artist, Linda Bergkvist, it depicts a lady in an 18th century robe with her hands clasped together.  Blood is falling from her hands but as it falls, it turns to bats, which run down onto her thigh and up onto her ribs.

“Something like this takes so much longer than a traditional tattoo,” she explains.  “You have to keep going over it, literally like an oil painting.  It’s taken about 13 hours and we’ve gone over it twice already but it’s going to look amazing when it’s done.”

Kay’s right side is her “traditional” side, extending from her nautically-themed back and into a teapot, which represents her beloved grandmother.

As a body modification artist, Kay also indulges her passion in other genres.  She has extensive body piercings – 20 in total including both nipples and three genital piercings.  She also practices body suspension – the rather unusual and some might consider gruesome art of putting hooks through your skin and levitating.

“Sometimes people don’t look at you for who you are and can’t see beyond this,” she says.  “It’s a real passion of mine and I’ve been doing it for a long time.  There’s a lot of tradition behind it and I do it in a respectful manner,” she says.

While more and more tattoo studios are popping up across the country, industry regulation has become a major issue of concern, as Dolores Murray, founder and spokesperson for ABMAI explains.

“Piercing and tattooing is a potential source of HIV, Hepatitis and serious infection.  Yet there are no formal industry regulations.  Anyone can set up a tattoo studio and with businesses struggling to survive, some will cut corners.  This was the motivation for the establishment of ABMAI – to encourage operators to sign up to minimum professional, ethical and hygiene standards,” she says.

Dolores encourages consumers not to look at tattooing in the same way as “buying a new pair of shoes”.  Customers should ask questions and not just base their choice of tattoo studio on price.

“Things have improved with the use of disposable equipment but we still come across people with bad infections.
“We have responded to the HSE’s recent whitepaper on the industry and have asked them to come back us.  What we’re about is representing the industry and safeguarding the public interest,” she says.