When was the last time you thought about airline safety as you boarded a plane?  Probably never.  But if you’re unlucky enough to live in Russia or Africa, the chances of meeting your maker as a result of an airline disaster are greatly increased.

According to the latest statistics from JACDEC (Jet Airline Crash Data Evaluation Centre) as reported in the latest edition of Aero Magazine, flying has become safer than ever with civilian air traffic fatalities down from 829 in 2010 to 428 in 2011.  In fact, taking to the skies has never been safer, since the 2nd World War.  However, Russia and Africa remain areas of major concern.

The majority of accidents stem from aircraft which are no longer being built.  Back in August, a new record was set by a Russian manufactured Antonow AN-12 which was 48 years in service.

Most accidents occurred on short haul routes, under 500 km.  In fact, 100 per cent of passengers who travelled on a long haul flight arrived safely at their destination.   The improved safety record can be attributed to better flight control systems and the establishment of a better safety culture in more countries.

However, Russia has now overtaken Africa as the country with the most worrying safety record and this region remains a significant problem.   Six crashes in the last year claimed the lives of 112 passengers.  According to Aero International, the problem in Russia is not due to a lack of security regulations but rather failure by airlines to adhere to them.  An insufficient interval between departing aircraft, particularly on the part of freight and small regional airlines, appears to be a problem.

Europe is the safest region for air transportation, despite several ground-based accidents.  The authors of the report warn, however, of a “ticking timebomb” – near-miss collisions of aircraft at airports with large volumes of departures and arrivals.

Interestingly, there were just six aircrash fatalities in 2011 in Europe and these occurred in Ireland, when a commuter flight from Belfast crashed at Cork Aiport in heavy fog, back in February.

Finally, All Nippon Airways has overtaken Qantas as the safest operator in the skies.

There have been many aircraft disasters over the years.  Here are the top 10, ranked according to the number of fatalities. 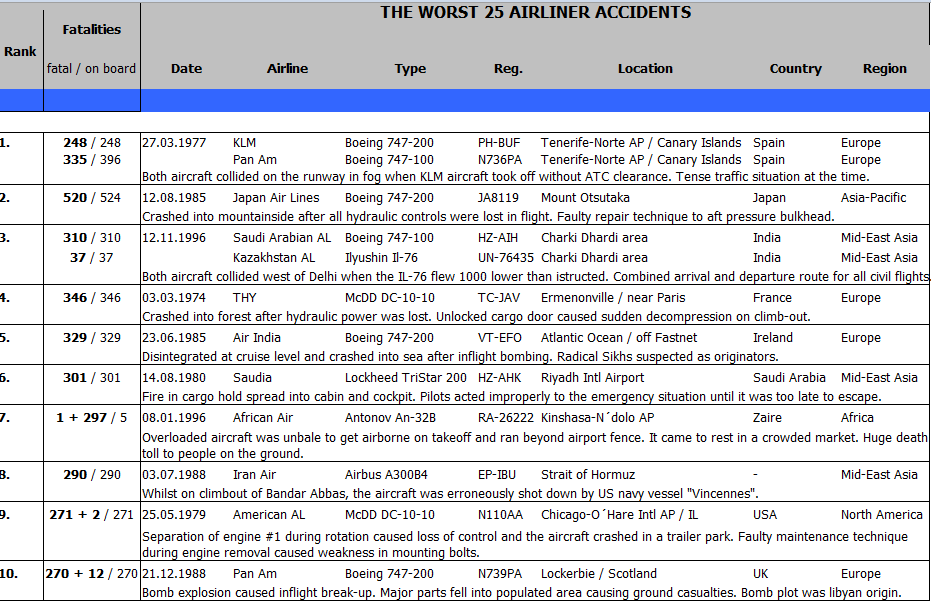 The landscape may be cold but Scandinavian crime writing is hot Staking a claim to Bram Stoker’s birthplace
Scroll to top
This website uses cookies to improve your experience. We'll assume you're ok with this, but you can opt-out if you wish.Accept Read More
Privacy & Cookies Policy