Not content with the plunder and pillage of our shores in 795, our Scandinavian brethren favour a more subtle form of invasion these days – that of our TV screens.

The latest wave of Nordic crime drama hit BBC Four this week with The Bridge – a dark, fast-paced and gripping production, which follows the investigation into the dumping of a female corpse on the Oresund Bridge between Malmo and Copenhagen.

Detectives believe the victim to be a Swedish politician but on closer examination discover that the corpse, which has been severed below the waist, actually comprises two bodies – the bottom half belonging to a drug-addicted, Danish prostitute. 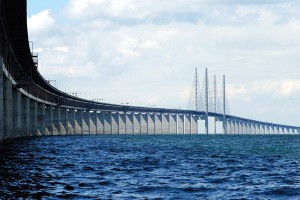 What’s unique about Scandinavian crime fiction is the consistent ability of its writers to create original and fascinating female lead characters.  Saga Noren (Sofia Helin) is a tough, and emotionally-detached detective, not dissimilar in personality to Lisbeth Salander of Larsson’s Millenium Trilogy.   What she lacks in communication skills and social mores, she more than makes up for, with her single-mindedness and commitment.

Martin Rohde (Kim Bodnia), a father of five children with three different mothers is a more stereo-typical cop who leads the Danish investigation.  The contrasting personalities and modus operandi of both leads, injects a peculiar chemistry into the plot, which is juxtaposed against parallel tales of a heart transplant patient and a homeless mother of two.

Broadcast by BBC Four in double episodes with another four to follow, The Bridge is a welcome addition to our the small screen and a perfect antidote to the formulaic Anglo-American crime drama, which has pervaded our prime time viewing for far too long now.  Roll on episode three.

The Bridge is broadcast on BBC Four each Saturday evening at 9pm and repeated at 11pm on Monday.

I’ve made over €2m from poker — but don’t tell me it’s... Crime and Punishment: Can Ireland learn from Sheriff Joe?
Scroll to top
This website uses cookies to improve your experience. We'll assume you're ok with this, but you can opt-out if you wish.Accept Read More
Privacy & Cookies Policy