The mercury rises to an unbearable 53 degrees Celsius.  The searing, mid-day, desert sun beams down on the canvas roof of the tent compound – the only protection, which 2,000 men and women have from the relentless, blistering heat.

You could certainly fry an egg on the stones here, if you had an egg.  But it seems like an eternity since breakfast and there’s just one more meal to come today.

This is not Iraq or some other middle-Eastern, war-torn battlefield.  This is ‘Tent City’, America’s largest canvas prison compound, where thousands of protestors gathered last weekend to demand its immediate closure on the grounds of human rights violations.

Established by “America’s Toughest Sheriff”, Joe Arpaio in 1993, ‘Tent City’ in Maricopa County, Arizona represents the ultimate “no frills” approach to fulfilling the rule of law.Over 427,000 inmates, including 80,000 women have served their time here, living in inexpensive, military-style tents, with the most basic of sanitary facilities and just two meals a day in temperatures of over 50 degrees Celsius.  Arpaio even stopped serving inmates salt and pepper to save tax payers $20,000 (€16,000) a year.

“I don’t think there’s much evidence to support what he’s doing as a crime prevention strategy,” comments Liam Herrick, Executive Director with the Irish Penal Reform Trust.  “This idea of being deliberately punitive for the sake of being punitive has a certain populist appeal, no doubt about that but whether it’s good public policy is a completely different question.”

Inmates cannot smoke, drink coffee, watch movies or sneakily enjoy the chaste pleasures of the odd pornographic magazine.  And in what some see as the ultimate humiliation, detainees are forced to wear garish pink prison underwear, a constant reminder of Sheriff Joe’s control over every aspect of their daily lives.

Inmates live with the constant threat of violence from other prisoners and some have lost their lives under very controversial circumstances while in the protective custody of Arpaio’s tough regime.

“Quite apart from the human rights issue, you’d also have to question as a matter of pragmatism, what are the consequences of these types of prison regimes,” says Herrick.  “Obviously, they are exposing the detainees to humiliation and possibly to health and other risks as well.  But in terms of rehabilitation and prevention of future offending, I think there’s a strong body of evidence to suggest that these types of regime only antagonise, and by humiliation, create a sense of anger, frustration and resentment among prisoners,” he says.

The regular, unannounced “shakedowns” or searches for contraband in ‘Tent City’ are tense affairs and the menacing diligence displayed by prison officers, deters the vast majority of inmates from disobeying the strict rules.

What would Sheriff Joe make of the 1,718 mobile phones seized in the Irish prison system in 2010 or the new accommodation block opened in Wheatfield in mid-2010, where each cell is fitted with a shower, full in-cell sanitation, sprinkler system, televisions and emergency call systems? 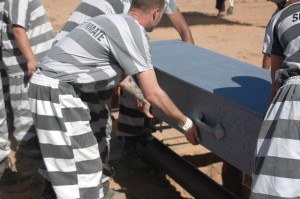 But while Herrick and Arpaio may disagree on the fundamental tenets of a modern, responsive penal system, one thing they are agreed on is the concept of prisoners contributing to society, through some form of meaningful employment while serving out their sentences.

Sheriff Joe uses the chain gang, where male, female and even juvenile prisoners work from morning to evening, carrying out a variety of community work such as removing graffiti, clearing roads and weeding public spaces.  This work saves Maricopa County and the state of Arizona thousands of dollars each year.

Herrick prefers programs such as the ‘Community Return Scheme’ where prisoners are released earlier onto community service placements.  Here they can do something of value for the community, even learning skills which will help them get a job afterwards.

“I believe there are a lot very positive aspects to the idea of prison work and meaningful activity for prisoners but it’s one of the areas where the Irish prison system has fallen down, particularly in some of the older prisons,” says Herrick.

But improving the quality of imprisonment at home is not just down to financial resources according to Herrick.  Keeping prison numbers down allows resources to be concentrated on education, training and rehabilitation.

“It’s not really a resource question – you don’t need a lot of money.  For example, there’s a much greater sense of co-operation between prisons and the probation service.  If you allocate some of its resources to probation, you could keep people out of prison.  This kind of joined-up-thinking hasn’t been there before and there are encouraging signs it’s starting to happen.”

“We would be optimistic that if we keep the prison numbers in Ireland down and focused on improving the quality of imprisonment, we could have a very effective and good prison system at some point in the future,” Herrick concludes.