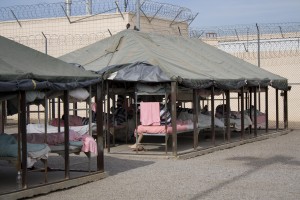 The mercury rises to an unbearable 53 degrees Celsius.  The searing, mid-day, desert sun beams down on the canvas roof of the tent compound – the only protection, which 2,000 men and women have from the relentless, blistering heat.

You could certainly fry an egg on the stones here, if you had an egg.  But it seems like an eternity since breakfast and there’s just one more meal to come today.

This is not Iraq or some other middle-Eastern, war-torn battlefield.  This is ‘Tent City’, America’s largest canvas prison compound, where thousands of protestors gathered last weekend to demand its immediate closure on the grounds of human rights violations. END_OF_DOCUMENT_TOKEN_TO_BE_REPLACED