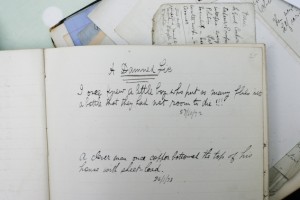 The journal reveals first-hand the real Bram Stoker – a man with a witty sense of humour, a great social awareness and a fledgling writer, who had leanings towards romantic prose – a genre not traditionally associated with the creator of arguably the most gruesome and ghastly literary character ever. END_OF_DOCUMENT_TOKEN_TO_BE_REPLACED