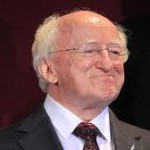 While more than 1 million of us ultimately decided that elder statesman Michael D Higgins was the best candidate for the job, questions still remain in my head about why someone who so clearly mis-represented their position before the people, still got over 614,000 votes.  Surely, honesty and transparency are some of the most basic traits we can expect from our First Citizen.   And what does this episode in our electoral history say about us a people? END_OF_DOCUMENT_TOKEN_TO_BE_REPLACED